Each year, TPL receives a minimum of $700,000 in funding requests for programs and organizations that support military families

Helping Soldiers and their Families

True Patriot Love Foundation (TPL) is a national charity that honours the sacrifices of members of the Canadian Armed Forces, veterans and their families in both times of peace and conflict. TPL funds unique programs and innovative research in the areas of family health and support, physical health and rehabilitation, mental health and wellbeing, and research and innovation. TPL is also committed to bridging the gap between military and civilian communities, hosting multinational symposiums and organizing ambitious global expeditions. Since 2009, True Patriot Love has committed more than $15.1 million to support military charities and research across Canada.

Rather than allocate funding directly to individual soldiers and their families, True Patriot Love works to honour Canada’s veterans and their families by working to break down the stigma surrounding mental illness and raising funds for rehabilitation and mental health well-being.

As a result, True Patriot Love has committed $5 million over the next 10 years to the Canadian Institute for Military and Veteran Health Research (CIMVHR) at Queen’s University.

It is estimated that 30 per cent of deployed military personnel suffer from some sort of operational stress injuries (OSI) such as post-traumatic stress disorder (PTSD) or depression. Mental injuries are less obvious than physical injuries, but they are not less harmful or prevalent.

TPL also funds unique veteran-focused programs and courses across Canada, such as Outward Bound Canada’s, Veterans Program. “As a PTSD survivor, I used to consider myself to be barely surviving,” said a 25-year veteran and participant of one of these programs. “The Outward Bound program firmly reminds me of who I am, where I fit in, that my service sacrifices were not in vain, and that I can still do amazing things I never thought possible.”

Since 2012, True Patriot Love has organized ambitious expeditions, pairing wounded veterans with business leaders. Through the harsh climate of the Canadian Arctic, and the extreme altitudes of the Himalayas, our soldiers continues to demonstrate their commitment to service, resilience and courage, inspiring other injured veterans through their journeys of recovery. By including prominent business leaders in these expeditions, mentorship opportunities are offered to veterans trying to establish a post-military career, while simultaneously opening the eyes of corporate Canada to the transferable skills of a military career. The funds raised through the expeditions are directed to care and services for ill and injured soldiers and to mental health support programs across the country.

In 2014, the largest expedition team in history was formed to ski to the Magnetic North Pole. Its goal was to bring attention to the challenges that face members of the Canadian military, their families and Canada’s veterans each day. During this two-week trip across perilous terrain in frigid temperatures, 12 ill and injured soldiers were on the trek, some with operational stress injuries, some wounded physically, along with 24 Canadian business leaders, including Paul Desmarais, Jr., Chairman and Co-CEO of Power and Paul Desmarais III, Vice-President of Power. The expedition was filmed for national broadcast, allowing the injured soldiers an opportunity to share their stories.

“Canadians across the country had the opportunity to get to know some of the veterans who are struggling with injuries and we are confident that their compelling stories had a lasting impact,” said Paul Desmarais III, Chair of the TPL Expedition.

“I am injured, but not broken. As a veteran, joining my peers under the support and guidance of Canada’s top civilian leaders, I faced the challenges of the North Pole, hoping to find the path to recovery and healing,” said retired Leading Seaman Bruno Guévremont of the 2014 Soldier Team.

“Most Canadians are far removed from the everyday realities of military life, including the impact of operational stress injuries like post-traumatic stress disorder on families,” said Shaun Francis, Founder and Chair of the True Patriot Love Foundation. “We have an obligation to do what we can to support those who have been physically and mentally injured.”

The True Patriot Love Foundation’s third expedition took place in January 2016. Nine wounded soldiers teamed up with 15 business leaders to summit Vinson Massif, the highest peak in Antarctica and one of the world’s Seven Summits.

By bringing these challenges into the spotlight, True Patriot Love strives to provide inspiration to those facing these issues every day and also garner financial support and awareness from Canadians across the country.

At a ceremony in Toronto on November 4, 2015, Mr. Paul Desmarais, Jr. received the first Patriot Award, in recognition of his outstanding efforts and fundraising achievements benefiting men and women of the Canadian Armed Forces, Veterans and their families.

Each year, TPL receives a minimum of $700,000 in funding requests for programs and organizations that support military families

“
Most Canadians are far removed from the everyday realities of military life, including the impact of operational stress injuries like post-traumatic stress disorder on families. We have an obligation to do what we can to support those who have been physically and mentally injured.
”
Shaun Francis Founder and Chair of TPL 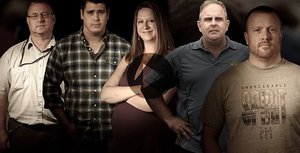