The facility provides much-needed space for local artists as well as for the display of artifacts. The inaugural exhibition is a survey of works on paper by the renowned artist Kenojuak Ashevak.

Many people from the local community of Cape Dorset were present for the inaugural opening events of this new facility devoted to the arts.

During the opening ceremony, David Joanasie, Member of Nunavut Legislative Assembly South Baffin, spoke on behalf of the Government of Nunavut about the importance of preserving the unique culture of the region.

Ooloosie et Adamie Ashevak, along with members of the Ashevak family, officially opened the Kenojuak Cultural Centre with the symbolic cutting of a traditional bearded seal skin rope. 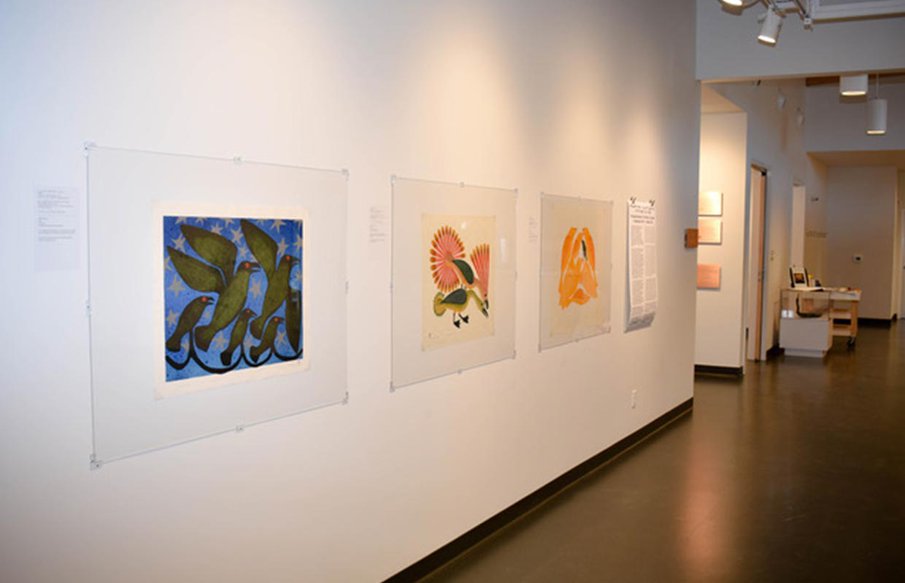 The Kenojuak Cultural Centre is now a world class studio and workspace for the current and next generation of artists.

The flags representing the Government of Canada, Government of Nunavut, Municipality of Cape Dorset and West Baffin Eskimo Co Operative were raised by Marcel Cooper, William Sandoval, and William Huffmann during the opening ceremony for the Centre on September 8, 2018.

A Hub of Artistic Expression for the North

Artists in the Canadian North have a new centre to call home, named after legendary Inuit artist Kenojuak Ashevak (1927-2013). Cape Dorset, located on a small island off the western arm of Baffin Island, is famous for producing artists skilled in the graphic arts and carving that has consistently captured the interest and patronage of the international art community. The Kenojuak Cultural Centre Capital Campaign responded to the urgent need to create a modern production infrastructure and cultural centre that facilitates, enhances and protects the works of this unique artistic community.

The revamped Kenojuak Cultural Centre opened its door in 2018. It can accommodate a range of activities for the local community and visitors with programs for the artists, elder and youth. On the economic side, the Centre acts as a catalyst for the growth of businesses that serve the tourist industry and provide job opportunities for community members.

Power Corporation proudly supports the Centre which provides space to celebrate the art of the North in its many forms and encourages intergenerational cultural transfer of stories and legends, traditional ways and intricacies of the carving and drawing techniques for which the community is famous.

The art of the people of the North is nothing short of astounding. This is more than simply supporting Inuit art and culture. With close to one in four people in the community earning a living with art making, this is about building economic and community capacity in the Arctic.

people make up the Cape Dorset community, which provides a home to a growing group of artists and carvers

The overall area in square feet that makes up the revamped Kenojuak Centre, a fully integrated cultural and artistic hub that opened in 2018