A world-class model serving the population of Québec

Every year, some 50,000 patients come through the doors of the Montreal Heart Institute (MHI). All receive a standard of care that’s considered among the best in the world, given the 2,000 professionals who work at the MHI and the state-of-the-art services they provide. As patients are helped and healed, they return to their families and loved ones, greatly multiplying the human impact of this remarkable facility.

Created in 1954 by pioneering Canadian cardiologist Dr. Paul David, the MHI was the first hospital in Canada to specialize in cardiology and performed the country’s first heart transplant in 1968. The Institute, which celebrated its 60th anniversary in 2014, takes a multidisciplinary approach within the cardiology field, supporting significant programs devoted to patient care, research, teaching, prevention, rehabilitation and the evaluation of new technologies.

In research alone, the MHI employs some 625 professionals, including some of the best scientists and researchers in the world. As a teaching hospital associated with the Université de Montréal, this research is also supported by some 125 graduate and post-graduate students.

The MHI has created the EPIC Centre for Preventive Medicine and Physical Activity, the largest facility for cardiovascular disease prevention in Canada, with 5,000 participants in primary and secondary prevention programs.

“The MHI has been a pillar of Canadian leadership in cardiology care, prevention, research and teaching for 60 years,” said André Desmarais, Deputy Chairman, President and Co-Chief Executive Officer, Power Corporation. “It has helped hundreds of thousands of Canadians regain their health and resume productive and rewarding lives. The MHI is a national treasure and Power is committed to its future.”

The MHI Foundation is deeply grateful to Power Corporation for its loyal support and its generous contribution to the MHI’s innovative projects, aimed at better predicting, preventing and treating cardiovascular diseases.

“
The MHI has been a pillar of Canadian leadership in cardiology care, prevention, research and teaching for 60 years.
”
André Desmarais
Deputy Chairman, President and
Co-Chief Executive Officer Power Corporation of Canada

See videos from the Montreal Heart Institute (in French only). 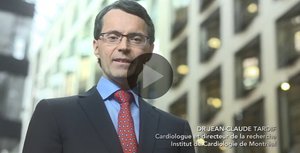