5,700 patients treated every year at the IRCM outpatient clinics, for a total of 13,000 annual visits

300 Master’s and PhD students, and postdoctoral fellows, study every year at the institute

The city of Montréal is regarded as having some of the world’s leading medical institutions, including major universities and teaching hospitals. To capitalize on the medical research expertise in the city, the Montreal Clinical Research Institute (Institut de recherches cliniques de Montréal – IRCM) was created in 1967 by Dr. Jacques Genest. It was the first research centre in Québec to bring together fundamental (also known as basic or pure) researchers and clinicians under one roof in addition to training high-level young scientists from all over the world in an innovative technological environment.

Today, the IRCM, is one of Canada’s leading research centres supporting 36 research units. The IRCM clinic is a recognized national leader in clinical care research in cardiovascular diseases, diabetes and hypertension. The outpatient clinics treat 5,700 patients and handle nearly 13,000 visits per year.

The IRCM’s funding is provided, in part, through the IRCM Foundation. Its mission is to financially support scientific projects, technological development and training activities at the IRCM. It holds several important fundraising events each year and stages periodic major fundraising campaigns. Its most recent Give for Life campaign, which was completed in June 2015, exceeded its objective and raised an impressive $15.2 million.

Close ties to both universities and clinical research

The IRCM attracts top researchers. Every year approximately 250 Master’s and PhD students attend the institute along with approximately 50 postdoctoral fellows. In addition, there are more than 30 rotations of medical residents per year.

Through these connections to the city’s medical community, IRCM researchers enhance Montréal’s reputation for leadership in clinical research. They represent a critical mass of expertise that makes the IRCM a valued partner in national and international research initiatives.

The Foundation is instrumental in the IRCM realizing its 2016-2021 strategic plan that includes two major initiatives: the establishment of the Research Centre on Rare and Genetic Diseases in Adults, the only one of its kind in Canada, and the Biomarkers discovery pipeline for precision medicine, which will help improve the treatment of diseases and accelerate the discovery of safe and effective new drugs.

“The IRCM Foundation contributes mightily to the progress of research, the implementation of state-of-the-art technological infrastructure and the training of the next generation of top-level scientists,” says Luc Reny, Vice-President of Power Corporation. “In addition to the groundbreaking clinical research conducted by staff at the IRCM, the Institute also provides innovative and compassionate care to its patients, characterized by a multi-disciplinary approach delivered by physicians, nurses, nutritionists and kinesiologists. Power Corporation supports with enthusiasm the work of the Institute. We applaud the impressive leadership of the IRCM Foundation in helping realize the Institution’s mission.”

5,700 patients treated every year at the IRCM outpatient clinics, for a total of 13,000 annual visits

300 Master’s and PhD students, and postdoctoral fellows, study every year at the institute

“
The IRCM Foundation contributes mightily to the progress of research, the implementation of state-of-the-art technological infrastructure and the training of the next generation of top-level scientists.
”
Luc Reny
Vice-President
Power Corporation 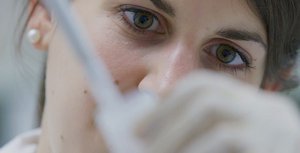