+$2.0 billion in cumulative research funding since 1970

22,000+ participants in the annual JDRF Ride for Diabetes Research

Type 1 diabetes (T1D) affects over 300,000 Canadians. It’s an autoimmune disease in which the pancreas doesn’t produce any insulin. Insulin is a hormone that helps your body to control the level of glucose (sugar) in your blood. Without insulin, glucose builds up in your blood instead of being used for energy. In simple terms, diabetes occurs when the body loses its ability to produce insulin and patients must inject themselves with artificial insulin, often several times a day.

For over 40 years, JDRF has been a global leader in the search for an end to T1D, through both research funding and advocacy. Part of JDRF’s mission is to help those living with T1D today to live healthier, easier, and safer lives.

JDRF’s goal is to progressively remove the impact of T1D from people’s lives until we achieve a world without T1D. JDRF collaborates with a wide spectrum of partners and is the only organization with the scientific resources, regulatory influence, and a working plan to better treat, prevent, and eventually cure T1D. As the largest charitable supporter of T1D research, JDRF is currently sponsoring $530 million in scientific research in 17 countries. Power Corporation has supported the JDRF since 1988.

JDRF remains dedicated to finding a cure for type 1 diabetes as its highest priority. To cure T1D will require the restoration of glucose-responsive, insulin-secreting beta cells by several possible methods, such as regeneration of remaining beta cells, or transplantation of an outside source of glucose-responsive, insulin-secreting cells. Restoration of functional beta cells either by regeneration or transplantation will need to include a way to stop the immune system from attacking these cells in the future. While clear progress is being made on these fronts, delivering a cure is a marathon effort, not a sprint.

Until a cure is within more immediate reach, JDRF is committed to keeping individuals with type 1 diabetes healthy and reducing the burden of living with the disease by improving glucose control with drugs and devices, including the development of artificial pancreas systems. Also, for those patients who have lived with the disease for decades, JDRF believes it is essential to find new ways to prevent, reverse or treat the complications of type 1 diabetes.

Additionally, as part of a comprehensive research program on type 1 diabetes, JDRF is funding research to further understand the underlying causes of the disease to develop strategies to prevent the disease from occurring in future generations.

Here in Canada JDRF holds a variety of fundraising initiatives every year. Its Ride for Diabetes Research is held every fall and routinely attracts well over 14,500 participants from companies across the country. In 2015, some $4.6 million was raised.

"Corporations that support JDRF typically use it for employee engagement which furthers our profile within the general population," says Dave Prowten, President and CEO of JDRF Canada. “The commitment and passion from the business community and from companies such as Power Corporation is fundamental to helping JDRF invest more money in finding a cure for type 1 diabetes research, and at a faster pace."

+$2.0 billion in cumulative research funding since 1970

22,000+ participants in the annual JDRF Ride for Diabetes Research

“
The commitment and passion from the business community and from companies such as Power Corporation is fundamental to helping JDRF invest more money in finding a cure for type 1 diabetes research, and at a faster pace.
”
Dave Prowten President and CEO JDRF Canada 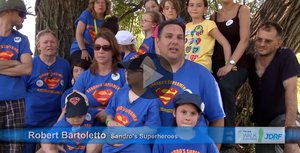