In the last 3 years, the Red Cross has contributed to 12 education projects in Québec

For Canadians and people around the world the Red Cross has long been a symbol of help and hope in times of great need and personal suffering. The Canadian Red Cross has been hard at work in communities for more than 120 years. The need for its services still grows every year. Whether it’s flooding in Eastern Canada, wild fires in the West, or other global humanitarian crisis brought on by domestic warfare or natural disaster such as earthquakes and hurricanes, the Red Cross is always on the front lines bringing relief.

What’s truly remarkable is that the Canadian Red Cross (CRC) has become a social movement with much of its programming delivered by trained volunteers who see their commitment as a means of giving back to their communities. It is a movement driven by compassion and a determination to assist whenever, wherever and for whomever there is a serious need.

Providing Help on a Number of Fronts

The CRC has become critical in responding to emergencies and disasters across Canada and around the world by working to support government, first responders and emergency management in their efforts. One also finds CRC staff and volunteers at the forefront of helping families in emergency situations, providing lodging, food, clothing and personal services, first aid, and temporary care for children and the elderly.

Given the large influx of refugees coming into Canada from countries such as Syria where millions have been displaced by civil war, the Red Cross has played an invaluable role in welcoming newcomers. The CRC, at the request of Citizenship and Immigration Canada, provides independent monitoring to promote a protective environment in which refugees are treated humanely and their rights are respected.

The CRC is committed to community health and wellness as well as prevention and safety. Whether it’s providing CPR training to Canadians or ensuring maternal, newborn and child health, the CRC makes a difference in the lives of citizens from coast to coast and anywhere else in the world, every day of the year. In the past decade, the CRC’s mandate has broadened to include mental health. Fostering a culture of good mental health also means raising happy and healthy young people, which has helped inspire the anti-bullying movement in Canada along with complimentary events like Red Cross Pink Day.

A Direct Impact on Québec Communities

During the Québec 2017 spring floods, over 2,400 households received emergency support: hotel lodging, food and clothing, and financial assistance to more than 5,500 people to help them return to a normal life. Close to 670 Red Cross volunteers were mobilized and a total of $10 million was raised with individuals, businesses, foundations, municipalities, and the governments of Québec and Canada all contributing.

Working with various levels of governments, the Red Cross in Québec was also instrumental in welcoming Syrian refugees. Volunteers and staff were on hand when the refugees arrived in Montréal, welcoming them and helping them meet their essential needs.

Another example is the nearly 600 volunteers and staff who were mobilized from across Québec, including 148 people from the Lac-Mégantic area, to help 3,000 people and businesses recover from the terrible train tragedy of July 6, 2013.

“We realize that it is through the generous financial support of average Canadians and socially minded companies such as Power Corporation that the Red Cross is able to touch as many lives as it does. It is humbling to be part of this effort and a privilege to be associated with the CRC,” says Stéphane Lemay, Vice-President and General Counsel of Power Corporation.

As Pascal Mathieu, Vice-President, Canadian Red Cross, Québec, says, “The Red Cross is enormously grateful to be able to count on Power Corporation as a key partner. That kind of commitment enables the Red Cross to be ready to provide emergency help to those who need it most, when they need it most. The ongoing support of Power Corporation and its employees is a sign of confidence in the Red Cross. Furthermore, such support translates into concrete assistance on the ground as soon as an emergency occurs, and we extend our sincere thanks to you for it.”

In the last 3 years, the Red Cross has contributed to 12 education projects in Québec

“
We realize that it is through the generous financial support of average Canadians and socially minded companies such as Power Corporation that the Canadian Red Cross is able to touch as many lives as it does. It is humbling to be part of this effort and a privilege to be associated with the CRC.
”
Stéphane Lemay
Vice-President and
General Counsel
Power Corporation 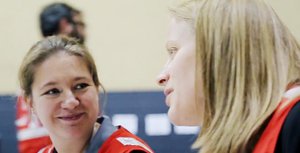