Inaugurated in 2008, the Mazankowski Alberta Heart Institute in Edmonton is the first heart institute to be built in Canada in 40 years. Operating under the auspices of Alberta Health Services, the Institute provides state-of-the-art cardiac care in one of the most environmentally advanced medical facilities in the country. Through its contributions to the University Hospital Foundation, Power Corporation has been a proud supporter of the Institute since its inception.

This leading-edge hospital provides a variety of outpatient clinics and services, diagnostic and non-surgical treatment areas, complex cardiovascular surgery units and inpatient care. It receives adult and pediatric patients from Alberta and Western and Northern Canada.

The Institute is home to the innovative Alberta Cardiovascular and Stroke Research Centre (ABACUS) which brings scientists and clinicians together in a translational research centre with a focus on vascular biology, imaging and intervention, and critical trials and outcomes.

A centre of excellence

The Mazankowski Alberta Heart Institute builds on the University of Alberta Hospital’s history as a centre of innovation for cardiac care. For example, it conducted the first open-heart surgery in Canada (1956) and the first heart transplant performed in Western Canada (1985).

The Institute is named after the Right Honourable Donald F. Mazankowski, a prominent Albertan, former federal cabinet minister and a tireless champion for its creation.
Mr. Mazankowski is also a former director of Power Corporation.

The building itself has LEED (Leadership in Energy and Environmental Design) silver certification, a global benchmark that identifies a sustainable, environmentally friendly building. It is one of the few healthcare institutions in the world constructed to meet LEED performance standards.

“Don Mazankowski and his fellow founders of the Institute had a vision for healthcare in Alberta,” said André Desmarais, Deputy Chairman, President and Co-Chief Executive Officer of Power Corporation. “Together, they built a remarkable medical facility that will stand the test of time as one of the best in the world. We’re glad to have played our part in making the Institute a reality, to the benefit of so many Canadians.”

“
Don Mazankowski and his fellow founders of the Institute had a vision for healthcare in Alberta.
”
André Desmarais Deputy Chairman, President and Co-Chief Executive Officer Power Corporation of Canada

See videos from the Mazankowski Alberta Heart Institute on YouTube. 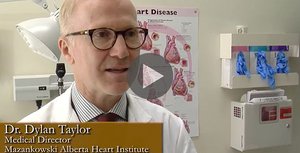