650 nurses are trained every year

Each year 24,800 patients are admitted, approximately 4,540 babies are delivered and 572,000 outpatient visits are provided

The hospital’s Foundation was created in 1969

When it opened its doors in 1934, the venerable Jewish General Hospital (JGH) was a response to the difficulties the city’s Jewish immigrants faced in obtaining proper healthcare and finding employment for its own healthcare specialists. Over the years, the hospital has remained true to its community-based roots and today continues its efforts to meet the needs of new waves of immigrants arriving from around the world. Tellingly, nearly half of the immigrants who arrive in Montréal every year settle in the culturally and ethnically diverse neighbourhood the hospital calls home.

Because the JGH enjoys a status as a referral centre in such fields as cancer and neonatology, it attracts patients from not just Montréal, but also from other regions in Québec and across Canada. The hospital has a reputation for elder care; it handles twice as many patients over the age of 75 than any other hospital in the city.

In 1969, the JGH opened the Lady Davis Institute for Medical Research which focuses on clinical investigation and laboratory research. The institute is considered one of Canada’s major biomedical research institutions and has earned international recognition in fields such as AIDS, aging, cancer and genetics. The hospital today has 645 attending doctors, most of whom hold teaching appointments with McGill University. Many of McGill’s clinics and research programs are located at the JGH.

In 2006, the hospital combined almost all of its cancer-related services and programs under one roof by creating the Segal Cancer Centre which occupies four floors in the hospital’s sprawling campus. This multidisciplinary approach – encompassing diagnosis, treatment, research, prevention and psychosocial support – allows healthcare professionals to work in concert to provide optimum care.

Much of the JGH’s remarkable progress over most of the past five decades has been driven by the vision and fundraising capability of its Foundation which was created in 1969. The Foundation’s mission is to advance health care and medical research for all Quebeckers through support of the JGH.

The Foundation operates on the belief that community outreach and response can build truly sustainable healthcare facilities. The Foundation’s efforts provide essential assistance to enhance patient care, to further scientific discovery and to acquire innovative, cutting-edge medical equipment. It was closely involved in the creation of the Segal Cancer Centre.

The JGH Foundation’s “Power to Heal” campaign — its most ambitious Capital Campaign to date — has already had a profound impact on the hospital’s ability to serve the population. With an eye to raising more than $250 million, the campaign’s vision is to build the hospital of the future with the very best people, equipment, facilities and programs to meet the changing and ever-increasing healthcare needs of Quebeckers and overcome the challenges facing the healthcare system as a whole.

650 nurses are trained every year

Each year 24,800 patients are admitted, approximately 4,540 babies are delivered and 572,000 outpatient visits are provided

The hospital’s Foundation was created in 1969 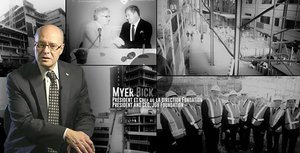