17 local Affiliates throughout the territory of action

Over 80 protected areas on private land

Dozens of landowners meet each year, raising awareness about the ecological value of their properties.

Appalachian Corridor is a conservation organization that, since its inception in 2002, contributed to protect 12,800 hectares (31,600 acres) of private land contained on over a hundred private properties in the Appalachians of southern Québec. Appalachian Corridor established and maintains numerous and precious partnerships, including with their national partner, Nature Conservancy Canada, their 17 Affiliates – local conservation groups – as well as other organizations on both sides of the Canada-U.S. border.

Such groups include the Massawippi Conservation Trust, Memphrémagog Wetland Foundation and Renaissance Brome Lake. On the U.S. side, organizations include the Cold Hollow to Canada Forest Link Project, Nature Conservancy Vermont Chapter, and the Wildlands Project. Appalachian Corridor receives funding from private donors and corporations as well as from a number of government agencies.

Through the implementation of a transborder conservation strategy, Appalachian Corridor works with local communities to maintain and restore a way of life that respects the ecology of the region from a perspective of sustainable development. Aiming at creating protected areas, this innovative science-based approach relies on the most up-to-date practices in conservation science and natural area management. This includes the implementation of “conservation cores” large enough to ensure the survival of species in their natural habitat with a buffer zone around them. Linkage corridors also allow wildlife movement from core to core.

In order to protect the most important natural areas on its territory of action, Appalachian Corridor relies on the involvement of landowners. The organization uses a number of conservation tools, such as full or partial land donation, conservation servitudes or a nature reserve status to ensure the protection of these natural areas through legal agreements.

Appalachian Corridor’s work led to the protection of a wide variety of species, including wide-ranging mammals such as black bear, moose, fisher and bobcat, all of which require vast forested areas to survive. Appalachian Corridor’s team also monitors species at risk such as the Peregrine Falcon, Bicknell’s Thrush, Chimney Swift, Wood Turtle and Golden Winged-Warbler. Forests cover 75 per cent of Appalachian Corridor’s territory of action and are vital to the region’s rich and abundant biodiversity.

“Appalachian Corridor provides a unique model of land conservation offering landowners a number of effective ways to preserve their properties,” said Paul Desmarais, Jr., Chairman and Co-CEO of Power Corporation. “By working with so many local, like-minded organizations on both sides of the border, Appalachian Corridor is having a definite impact on a large swath of ecosystems in the region without regard to human-imposed borders.”

17 local Affiliates throughout the territory of action

Over 80 protected areas on private land

Dozens of landowners meet each year, raising awareness about the ecological value of their properties.

See videos from the Appalachian Corridor. 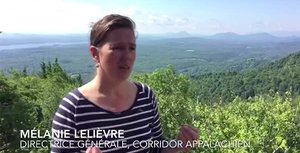