2,000 rare artifacts belong to NMC’s collection, which spans over 450 years of music technology and innovation

9 towers gather to form the body of the building

Studio Bell, home of the National Music Centre (NMC), is virtually all things to all (music-loving) people: rich archive of exhibitions, performance space, recording studio and a general mecca for the musical community. The dramatic architecture of the complex, which bridges two building blocks and cradles the historic King Edward Hotel, has become a dazzling fixture in Calgary’s East Village.

The NMC traces its roots back to the installation of a pipe organ in Calgary’s Jack Singer Concert Hall in 1987. From there it evolved into a number of incarnations, including the Cantos Music Museum which finally became the National Music Centre in 2012.

NMC’s collection has more than 2,000 rare instruments and artifacts, and is also home to three Canadian halls of fame – the Canadian Music Hall of Fame, the Canadian Songwriters Hall of Fame, and the Canadian Country Music Hall of Fame. Visitors to Studio Bell, which opened Canada Day 2016, will see one of the earliest electronic instruments – the Ondes Martenot – which took 10 years to find.  Also on display are the piano on which Elton John created his first four albums and Randy Backman’s 1959 Gibson Les Paul guitar on which he wrote and recorded the iconic Guess Who song American Woman.

The King Eddy is considered to be the largest artifact in NMC’s collection. Built in 1905, the Eddy was a popular live music venue, earning the reputation of Calgary’s ‘Home of the Blues’ in the 1980s. Closed in 2004, the hotel is now fully renovated and features live performances.

“We are truly proud to be a supporter of the National Music Centre, whose new facility will serve as a focal point for music lovers and makers alike,” says Paul Desmarais, Jr., Chairman and Co-CEO of Power Corporation. “We now have a national venue to help share Canada’s remarkable music story.”

“Now that Studio Bell has opened to the public, we can begin to unite Canadians through the power of music and our heritage,” says Andrew Mosker, President and CEO of NMC. “We are pleased to recognize Power Corporation’s support in the Made in Canada stage, an exhibition space that will inspire generations of music lovers through the landmark moments that have defined music in Canada. Thanks to the support of organizations like Power Corporation, we have been able to make this dream of building a home for music in Canada a reality.”

2,000 rare artifacts belong to NMC’s collection, which spans over 450 years of music technology and innovation

9 towers gather to form the body of the building

“
We are truly proud to be a supporter of the National Music Centre, whose new facility will serve as a focal point for music lovers and makers alike.
”
Paul Desmarais, Jr.
Chairman and Co-CEO
Power Corporation 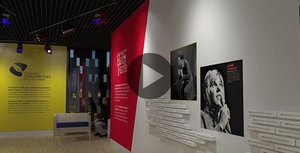