The Awards were created in 1992

Canadian Talent under the Spotlight

The Governor General’s Performing Arts Awards are Canada’s foremost distinction for excellence in the performing arts. The awards recognize a stellar array of artists and arts volunteers for their outstanding contribution to culture in Canada and abroad. They come from all walks of life and work in different disciplines, but they share a common devotion to the performing arts. They are the recipients of the annual Governor General’s Performing Arts Awards which, since 1992, have honoured exceptional Canadians for their lifetime artistic achievement. Over the years, award recipients have included Dominique Michel, Norman Jewison, Jean-Marc Vallée, Sarah McLachlan, Marie Chouinard, Michael Bublé and Martin Short.

The awards are administered by the Governor General’s Performing Arts Awards Foundation, which Power Corporation has been supporting for many years. The Foundation was created under the leadership of then Governor General Ramon John Hnatyshyn and his wife Gerda. Today, Governor General Julie Payette is the patron of the awards.

Recognition of Excellence in the Performing Arts

The awards are given in the categories of dance, classical music, popular music, film, broadcasting and theatre. In addition, two other awards are also given: the Ramon John Hnatyshyn Award for Volunteerism in the Performing Arts and the National Arts Centre Award which recognizes an artist’s or a company’s work during the past performance year.

Recipients of the award receive $25,000 each and a special medal struck by the Royal Canadian Mint. In 2007, the National Film Board joined the Awards Foundation as a creative partner and in 2008 began creating short films on each recipient. These short films are shown at the annual Awards Gala held in Ottawa at the National Arts Centre. The evening prior to the Gala, a special dinner is held for award recipients at the official residence of the Governor General, Rideau Hall.

The Governor General’s Performing Arts Awards go beyond recognizing great talent and dedication:  they also encourage new achievement. The Award Foundation supports a unique Mentorship Program that allows past Award recipients to inspire other Canadian artists who are in the middle of their career. Every year, a past laureate of the Lifetime Artistic Achievement Award is asked to mentor a protégé so that the two can grow and learn from each other’s experiences.

It is the Canadian public who nominate individuals for award consideration and the Awards Foundation make great efforts every year to ensure the awards and the events surrounding them are promoted to Canadians from coast to coast.

“We at Power Corporation are extremely proud of the great artistic talent that Canada continually produces. We are delighted to support the Governor General’s Performing Arts Awards which profile and celebrate these inspiring Canadian artists,” says Paul Genest, Senior Vice-President of Power Corporation.

“Power Corporation’s support for the Governor General’s Performing Arts Awards and Gala is truly inspirational,” says Jane Watson, CEO of the National Arts Centre Foundation. “Through these awards, talented Canadian performing artists are recognized for their outstanding contribution to the culture and the arts in Canada and abroad. We are grateful to our partners for contributing to highlight the importance of the arts as one of our nation’s greatest assets.”

The Awards were created in 1992

“
Through these awards, talented Canadian performing artists are recognized for their outstanding contribution to the culture and the arts in Canada and abroad.
”
Jane Watson
CEO
National Arts Centre Foundation 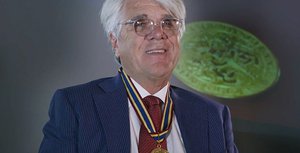